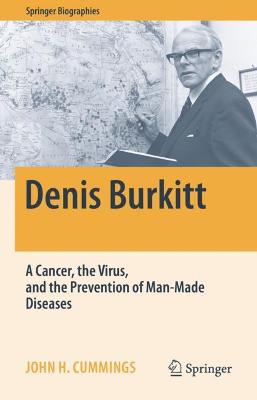 This biography of Dr. Denis Parsons Burkitt, after whom the childhood cancer Burkitt's lymphoma was named, and who was a pioneer of the dietary fiber movement, paints a personal but holistic portrait of both the man and his life's work. Featuring excerpts from Dr. Burkitt's personal diaries, spanning seven decades from his boyhood to just before his passing, and extensive family archives, this book invites readers to follow Burkitt's journey through life and experience his tribulations and successes. Prof. John Cummings was a colleague of Dr. Burkitt and weaves the tale of his life through the lens of family, faith, and science.

The journey takes Burkitt from his childhood in Ireland, a country undergoing major social upheaval, through his medical studies in Dublin, to army service in Africa in the midst of WWII and the independence movements that swept the continent in the following years. During his two decades spent in Uganda, working for the Colonial Medical Service, Burkitt made his first major contribution to cancer research - the characterization of Burkitt's lymphoma and its possible viral cause. Following his return to England in 1966, he turned his attention to the cause of 'Western Diseases' especially the role of dietary fibre in the prevention of disease and promotion of health. This earned him even wider international recognition and helped to inspire what is a vital field of research today. The book examines Burkitt's personal views of the world around him, including his experiences as a committed evangelical Christian who had been raised an Irish Protestant, and the challenges, both familial and cultural, that this elicited from and towards him and his scientific work.

The lymphoma and later the fibre story propelled Denis into an orbit of worldwide travel, fame and many honours. An engaging speaker but man of great humility, always giving the credit for much of what he did to others, he left a legacy of evidence and ideas for the causes of cancer and prevention of disease from which we all now benefit.

DedicationAbbreviationsPreface1. For God, the world and the robin.2. Formative years3. Trinity College Dublin; a new direction4. Learning to be a doctor with a faith5. War changes everything6. Doubts and frustrations 1944-19467. Lira. The start of a great journey8. Mulago 1948 - 1956; A busy surgeon.9. Jaw Tumours, Kilimanjaro and looking down at the world10. It's a Lymphoma11. Establishing ownership of the Lymphoma12. The long safari13. Into orbit14. A cure for Burkitt's Lymphoma15. America16. A virus causing cancer?17. Out of Africa18. 'Time and chance happen to all men'19. In transition to a new theory. 20. A 'flash of understanding'21. The gospel according to Burkitt22. Fibre launched but is controversial.23. 'Character is more important than cleverness.'24. Man-made Diseases25. Preparing for departure
Appendix 1. Curriculum vitae.

Part 2. Papers in medical and scientific journals/chapters in books

Part 4. Tributes and other articles