Price
Quantity
£68.95
(To see other currencies, click on price)
Hardback
Add to basket 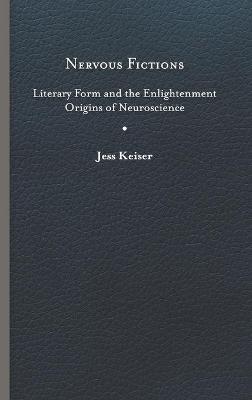 In the late seventeenth century, a team of scientists managed to free, for the first time, the soft tissues of the brain and nerves from the hard casing of the skull. In doing so, they not only engendered modern neuroscience, and with it the promise of knowing the mind through empirical study of the brain; they also unleashed a host of questions, problems, paradoxes, and--strangest of all--literary forms that are still with us today.

Nervous Fictions is the first account of early neuroscience and of the peculiar literary forms it produced. Challenging the divide between science and literature, philosophy and fiction, Jess Keiser draws attention to a distinctive, but so far unacknowledged, mode of writing evident in a host of late seventeenth and eighteenth-century texts: the nervous fiction. Apparent not just in scientific work, but also in poetry (Barker, Blackmore, Thomson), narrative (Sterne, Smollett, ""it-narratives""), philosophy (Hobbes, Cavendish, Locke), satire (Swift, Pope, Arbuthnot), and medicine (Mandeville, Boswell), nervous fictions dissect the brain through metaphor, personification, and other figurative language. Nervous fictions stage a central Enlightenment problematic: the clash between mind and body, between our introspective sense of self as beings endowed with thinking, sensing, believing, willing minds and the scientific study of our brains as simply complex physical systems.