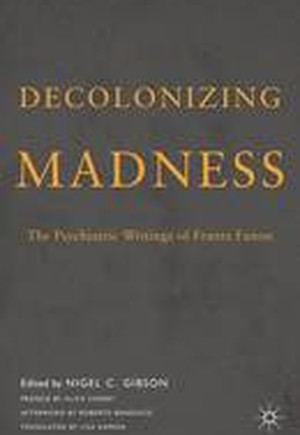 The Martiniquian-born theorist, revolutionary, and psychiatrist Frantz Fanon was a foundational figure in postcolonial thought and practice, and along with Foucault and Lacan, he remains an indispensable thinker on the complex interrelationships of identity, politics, and psychoanalysis. His biographers have always noted that his medical career was not a profession he chose by chance but one that reflected his humanist convictions, yet his psychiatric work has only received sustained attention in recent years - and then only from scholars fluent in French. Now available for the first time in English, the pieces collected here demonstrate in concrete ways how Fanon's conception of a radical psychiatry based in human liberation and self-activity was directly related to his philosophy and politics. They offer specific content for ongoing debates over psychiatry and politics in contemporary society, and together form an essential text for anyone working in postcolonial studies, Fanon studies, history, psychiatry, and politics.

Foreword; Alice Cherki Introduction; Roberto Beneduce 1. The North African Syndrome (1952) 2. Social Therapy in a Ward for Muslim Men (1954) 3. Aspects of the Present State of Mental Care in Algeria (1955) 4. Exacting Confessions in North Africa (1955) 5. Reflections on Ethnopsychiatry (1955) 6. The T.A.T. (Thematic Apperception Test) and Muslim Women: A Sociology of Perception and Imagination (1956) 7. The Maghrebian Muslim's Response to Madness (1956) 8. The Agitation Phenomenon in Psychiatry: General Considerations and Psychopathological Significance (1957) 9. On a Case of Torsion Spasm (1958) 10. The Benefits and Limitations of Day Hospitalization in Psychiatry (1959)