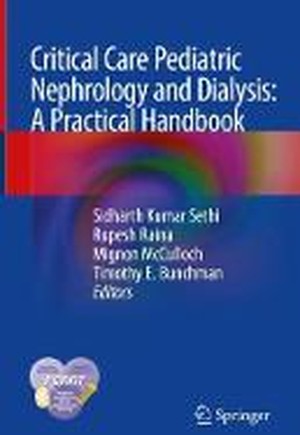 This book covers all key aspects of critical care in pediatric nephrology, including acute dialysis in sick children. It also provides detailed protocols for managing fluid and electrolyte balance and dialysis in children in intensive care. In addition, this quick guide discusses innovations in pediatric renal replacement therapy technologies, such as plasma exchange, CARPEDIEM, NIDUS and aquadex. This is a go-to book for intensivists, physicians and trainees working in pediatric intensive care units.

Dr. Rupesh Raina MD, FACP, FAAP, FASN and FNKF is an Associate Professor and currently a combined Adult and Paediatric Nephrologist, Director of Medical Research in Internal Medicine at the Cleveland Clinic Foundation's Akron General Medical Center the Akron Children's Hospital. He is also a member of the faculty and research staff at Case Western University School of Medicine. Dr. Raina is a member of the University Council of Medicine at Northeast Ohio Medical University. His research interests include the pathophysiology and prevention of the progression of renal cystic disease; transition of nephrology care from paediatrics to adults; renal replacement therapy; and high flow ultrafiltration for management of inborn errors of metabolism. He has a particular interest in developing medical curricula and case-based workshops to enhance medical students' and residents' clinical knowledge. He has trained numerous scientists and clinical researchers from the United States and abroad, and has written several peer-reviewed articles, editorials and book chapters related to biomedical research and clinical activities. He is currently a member of the National Kidney Foundation's Medical Advisory Board, fellow of the American College of Physicians the American Association of Paediatrics and the American Society of Nephrology, and fellow and board member of the National Kidney Foundation.

Prof. Mignon McCulloch is currently a Paediatric Nephrologist and Consultant at the Paediatric Intensive Care Unit at the Red Cross War Memorial Children's Hospital, Cape Town, as well as a Senior Lecturer at the University of Cape Town, South Africa. She is also an Honorary Consultant at Evelina London Children's Hospital, United Kingdom. Her interests include developing paediatric nephrology and care of critically ill children, specifically acute kidney injury (AKI), and all forms of dialysis in infants and children especially in poorly resourced regions, adolescent transition and paediatric transplantation (renal, liver and cardiac). She is the current President Elect of the International Paediatric Transplantation Association (IPTA), Assistant Secretary of International Paediatric Nephrology Association (IPNA) and President of the African Paediatric Nephrology Association. She is actively involved in the `Saving Young Lives (SYL)' steering committee - providing hands-on training in paediatric dialysis to teams of doctors and nurses at residential courses, including bedside PD catheter insertion, vascular access training, basic resuscitation and all forms of dialysis.

Dr. Timothy E. Bunchman is currently tenured professor and division chief, Children's Hospital of Richmond at Virginia Commonwealth University (VCU), USA. His primary departmental program area is paediatric nephrology. He is trained in paediatric nephrology from University of Minnesota, Minneapolis. His areas of expertise and interest are pediatric transplantation, acute kidney injury, renal replacement therapy and vasculitis. He has published papers in international journals and contributed chapters in books on paediatric nephrology and paediatric critical care. He has multiple awards to his credit and has been nominated by the American Society of Paediatric Nephrology to the National Advisory Committee on Children and Disasters (NACCD). He is on editorial board of many reputed international journals including Pediatric Critical Care Medicine, Paediatric Nephrology, and Nephrology Dialysis Transplantation. He has also been an associate editor for American Journal of Kidney Diseases. He is the organiser and program director of the International Conference on Pediatric Continuous Renal Replacement Therapy (PCRRT) endorsed by International Paediatric Nephrology Association (IPNA) as well as the critical care section of the American Academy of Paediatrics (AAP).