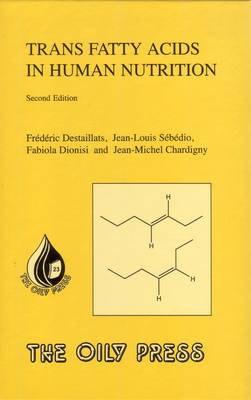 In this completely rewritten Second Edition of Trans Fatty Acids in Human Nutrition authors who are recognized international authorities in their field have addressed the major areas of trans fatty acids (TFA) research such as consumption, analysis, biochemistry, synthesis and natural TFA biosynthesis, health effects, food formulation, and also regulation and consumer perception. Each chapter contains the latest references and major advances and breakthroughs in a specific area of trans fatty acids research. Furthermore, the book also includes a discussion of a major issue - the health effects of the natural trans isomers, comparing their effects to those observed for TFA produced during hydrogenation. The First Edition carried out a very similar task for the state of our knowledge in the late 1990s but the rapid expansion and progress in the subject meant that it had to be completely re-written and expanded from the original 9 to the present 15 chapters of the Second Edition.