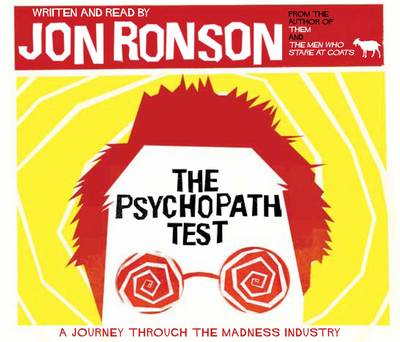 This is a story about madness. It all starts when journalist Jon Ronson is contacted by a leading neurologist. She and several colleagues have recently received a cryptically puzzling book in the mail, and Jon is challenged to solve the mystery behind it. As he searches for the answer, Jon soon finds himself, unexpectedly, on an utterly compelling and often unbelievable adventure into the world of madness. Jon meets a Broadmoor inmate who swears he faked a mental disorder to get a lighter sentence but is now stuck there, with nobody believing he's sane. He meets some of the people who catalogue mental illness, and those who vehemently oppose them. He meets the influential psychologist who developed the industry standard Psychopath Test and who is convinced that many important CEOs and politicians are in fact psychopaths. Jon learns from him how to ferret out these high-flying psychopaths and, armed with his new psychopath-spotting abilities, heads into the corridors of power...Combining Jon's trademark humour, charm and investigative incision, The Psychopath Test is a deeply honest book unearthing dangerous truths and asking serious questions about how we define normality in a world where we are increasingly judged by our maddest edges.