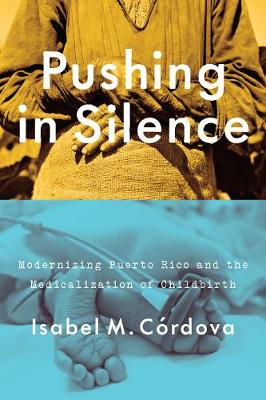 As Puerto Rico rapidly industrialized from the late 1940s until the 1970s, the social, political, and economic landscape changed profoundly. In the realm of heath care, the development of medical education, new medical technologies, and a new faith in science radically redefined childbirth and its practice. What had traditionally been a home-based, family-oriented process, assisted by women and midwives and "accomplished" by mothers, became a medicalized, hospital-based procedure, "accomplished" and directed by biomedical, predominantly male, practitioners, and, ultimately reconfigured, after the 1980s, into a technocratic model of childbirth, driven by doctors' fears of malpractice suits and hospitals' corporate concerns.

Pushing in Silence charts the medicalization of childbirth in Puerto Rico and demonstrates how biomedicine is culturally constructed within regional and historical contexts. Prior to 1950, registered midwives on the island outnumbered registered doctors by two to one, and they attended well over half of all deliveries. Isabel M. Cordova traces how, over the next quarter-century, midwifery almost completely disappeared as state programs led by scientifically trained experts and organized by bureaucratic institutions restructured and formalized birthing practices. Only after cesarean rates skyrocketed in the 1980s and 1990s did midwifery make a modest return through the practices of five newly trained midwives. This history, which mirrors similar patterns in the United States and elsewhere, adds an important new chapter to the development of medicine and technology in Latin America.