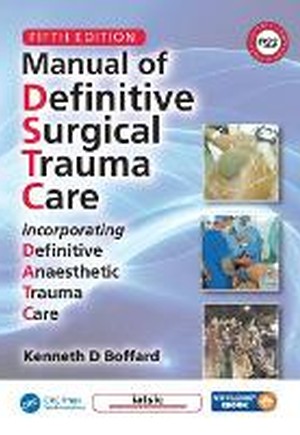 Developed for the International Association for Trauma Surgery and Intensive Care (IATSIC), the Manual of Definitive Surgical Trauma Care 5e is ideal for training all surgeons who encounter major surgical trauma on an infrequent basis. This fifth edition had been revised and updated on the basis of new evidence-based information. The increasing role of non-operative management (NOM) has been recognised. With the increased need for humanitarian intervention, as well as military peacekeeping, the Military Module has been substantially updated and broadened to reflect recent conflict experience, and a new expanded section highlighting trauma management under austere conditions has been added.Written by faculty who teach the DSTC Course, this book focuses on life-saving surgical techniques to use in challenging and unfamiliar incidents of trauma.

Professor Ken Boffard is Professor of Surgery and Trauma Director at Milpark Hospital, Johannesburg, and until recently, Head of the Department of Surgery at Johannesburg Hospital and the University of the Witwatersrand. He was previously Head of the Johannesburg Hospital Trauma Unit. He qualified in Johannesburg, and trained in Surgery at the Birmingham Accident Hospital and Guy's Hospital. He is past President of the International Society of Surgery (ISS) in Switzerland, the International Association for Trauma Surgery and Intensive Care (IATSIC), and Chair of the IATSIC Education Committee. He is a Fellow of five Surgical Colleges, and has received Honorary Fellowships from the American College of Surgeons, Royal College of Surgeons of Thailand, College of Surgeons of Sri Lanka, and the Association of Surgeons of Great Britain and Ireland. His passion is surgical education, and various aspects of trauma resuscitation, intensive care, and regional planning of Trauma Systems. His interests include flying (he is a licensed fixed wing and helicopter pilot), scuba diving, and aeromedical care. His research interests include coagulation, haemostasis and critical bleeding. He is a Colonel in the South African Military Health Service. He is a Freeman of the City of London by redemption, and an elected Liveryman of the Guild of Air Pilots of London. He is married with two children.