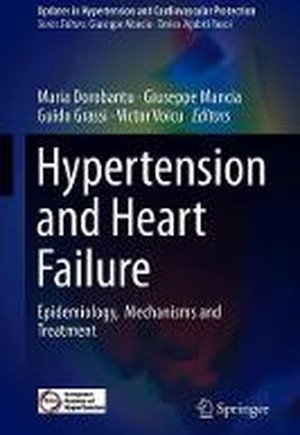 This book explains how hypertension affects 20-50% of the adult population in developed countries. Heart failure is the result of the hypertension's effects on the heart and it represents a growing public health problem. In this context the international scientific community is continuously struggling to develop better strategies in screening, diagnosing and treating hypertension and its deleterious effects. Thus, this field is continuously changing, with new important information being added constantly. This volume will offer both insights into the intimate mechanisms of transition from hypertension to heart failure and clinical practice advice on the prevention and treatment of heart failure in hypertensive population. The mechanisms which explain the progression from hypertension to heart failure will be also covered exhaustively by offering two chapters referring to the diagnosis of heart failure in hypertensive population and one regarding echocardiography which is the most frequently used imaging method in clinical practice. The reader will be also provided with information on cardiovascular magnetic resonance which has the unique advantage of differentiating hypertensive heart failure from other pathologies associated with increased myocardial thickness. This book is a useful tool for clinicians but also to the research community interested in heart failure and consequences of hypertension on heart who want to be up-to-date with the new developments in the field.

Maria Dorobantu is Professor of Cardiology at the University of Medicine and Pharmacy Carol Davila Bucharest, Romania, and head of the Cardiology Department of Clinical Emergency Hospital, Bucharest. She has a special interest in the assessment and treatment of heart failure and arterial hypertension and has been principal investigator of important trials. She is the President of the Romanian Society of Hypertension and the national coordinator of the SEPHAR studies (Study for the Evaluation of Prevalence of Hypertension and Cardiovascular Risk among the Adult Population of Romania). Since 2016 she has been the chairperson of the Coronary Pathophysiology and Microcirculation Working Group of Europeam Society of Cardiology. Giuseppe Mancia is Professor Emeritus of the University of Milano and Head of the Hypertension Centre of the Instituto Clinico Universitario, Verano Brianza. He is President of the Italian Foundation on "Ricerca e Innovazione su Ipertensione e Protezione Cardiovascolare", of the Foundation of the European Society of Hypertension (ESH) in Zurich and Chairman of the Educational Board of ESH. He is since many years in the list of the "highly cited" scientists (Thompson Reuters) and has in 2013 been regarded as one of the 400 most influential biomedical investigators in the world (EJCI 2013). Guido Grassi is Professor of Internal Medicine at the Clinica Medica of the University of Milano, director of the PhD course in "Hypertension and Cardiovascular Risk", and director of the Center of Clinical Physiology and Hypertension of the same university. He is member of the Scientific Council on Hypertension of the ESC, ESH and ISH. He is also member of the ESH/ESC Task Force Guidelines on the Management of Hypertension. He is Executive Editor of "Journal of Hypertension", official Journal of the ISH and the ESH. Victor Voicu is currently fellow the and vice president of Romanian Academy and President of Medical Science Section of Romanian Academy. He is Professor of Department of Pharmacology, Toxicology and Clinical Psychopharmacology, Faculty of Medicine, University of Medicine and Pharmacy "Carol Davila" Bucharest. He is President of the Romanian Society of Therapeutics, Pharmacology and Clinical Toxicology, and coordinator of Drug Sciences Panel of the Executive Unit for Financing of Higher Education, Research, Development and Innovation (EUFHERDI). Prof. Voicu is correspondent member from abroad of French National Academy of Medicine.