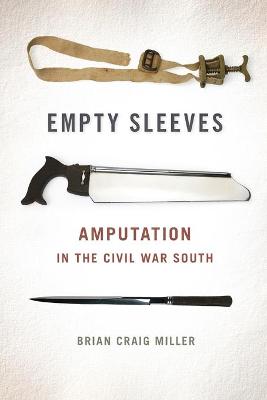 The Civil War acted like a battering ram on human beings, shattering both flesh and psyche of thousands of soldiers. Despite popular perception that doctors recklessly erred on the side of amputation, surgeons laboured mightily to adjust to the medical quagmire of war. And as Brian Craig Miller shows in Empty Sleeves, the hospital emerged as the first arena where southerners faced the stark reality of what amputation would mean for men and women and their respective positions in southern society after the war. Thus, southern women, through nursing and benevolent care, prepared men for the challenges of returning home defeated and disabled.

Still, amputation was a stark fact for many soldiers. On their return, southern amputees remained dependent on their spouses, peers, and dilapidated state governments to reconstruct their shattered manhood and meet the challenges brought on by their newfound disabilities. It was in this context that Confederate patients based their medical care decisions on how comrades, families, and society would view the empty sleeve. In this highly original and deeply researched work, Miller explores the ramifications of amputation on the Confederacy both during and after the Civil War and sheds light on how dependency and disability reshaped southern society.