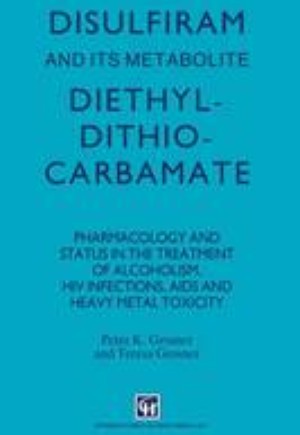 This book is aimed at those in the biomedical community that are interested in the therapeutic applications, pharmacology, biochemistry, toxicology and pharmacokinetics of the title compounds. Recent findings regarding the ability of diethyldithiocarbamate (ditiocarb, Imuthiol®) to delay the progression of HN infections and AIDS, the discovery of its potential as a rescue agent in cancer chemotherapy, and the identification of disulfiram (Antabuse®) regimens that allow alcoholics to achieve abstinence of many months' duration have made writing this book an exciting experience. At the same time the fact that the two drugs differ substantially in their pharmacological effects in spite of their easy interconvertibility has rendered the writing intellec­ tually challenging. Diethyldithiocarbamate, an agent seemingly less toxic than aspirin, rivals it in the multiplicity and diversity of its pharmacological proper­ ties. Notable among these are the manyfold potent immunostimulant effects, and though most of these involve effects on T -cells, the mechanism of diethyldithiocarbamate's action remains far from clear. The drug is also a potent chelator of heavy metals and this has led to a number of clinical applications. As might be expected, it inhibits several important enzymes. Further, it is one of the most effective radioprotective agents; it also protects organisms against a variety of toxic agents.

Average Rating
...a well written, detailed publication on literally everything the reader would wish to know about disulfiram and its metabolite - British Journal of Psychiatry; This well written and carefully edited volume deserves the interest of toxicologists, pharmacologists, immunologists, biochemists and clinicians. Journal of Applied Toxicology; It is hoped that clinicians and behavioral scientists have read this book for their own education and also to appreciate the advances made in the biochemical pharmacology of DSSD and SSH. This book should capture the interest of medicinal chemists and pharmacologists who are engaged in research in cancer, immunomodulation, HIV, and heavy metal toxicity. Selected chapters are must reading for biomedical scientists pursuing alcoholism research. Journal of Medicinal Chemistry
© Wisepress Ltd.
All rights reserved.