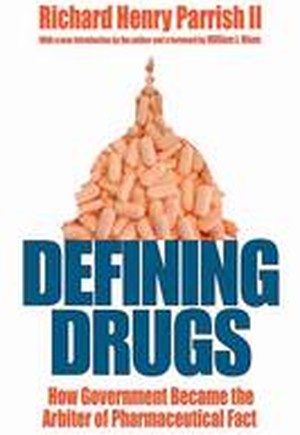 In Defining Drugs, Richard Henry Parrish II argues that the federal government became arbiter of pharmaceutical fact because the professions of pharmacy and medicine, as well as the pharmaceutical industry, enforces these definitions and standards through police powers reserved to government. In a new introduction to this edition, Parrish argues that an amendment to the United States Constitution is needed to protect health freedom from government and industry intrusion.Parrish begins his provocative study by examining the development of the social system for regulating drug therapy in the United States. He reviews the standards that have been negotiated, and the tensions of the period between Progressivism and the New Deal that give cultural context and historical meaning to drug use in American society. He also describes issues related to the development of narcotics policy through education and legislation, and documents the federal government's evolving role as arbiter of market tensions between producers, government, and citizens.More than 100,000 Americans die each year from prescription pharmaceutical therapies. Parrish argues that the current system of drug dispensing is fatally flawed. This controversial volume is written for the scholar and the practitioner alike, and a general public concerned with pharmacy regulation in a free society.

ContentsFiguresForeword to the Paperback EditionIntroduction to the Paperback EditionForewordPrefaceAcknowledgementsIntroduction1. "The Search for Order" between Progressivism and the New Deal2. Pharmaceutical Fact3. Letters between Leaders4. Dispensing Doctors and Counter-Prescribing Pharmacists5. Negotiating Reality: The Construction of EnforceablePharmaceutical StandardsDenouement: Defining Drugs: Consequences of SeekingExternal GovernanceMethodology and Bibliographic SourcesBibliographyIndex