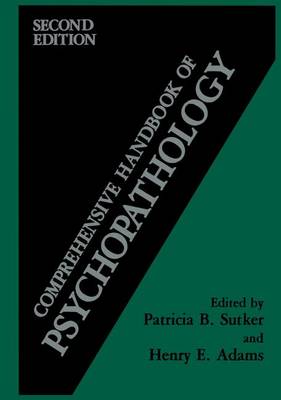 The first edition of Comprehensive Handbook of Psychopathology was published in 1984, al­ most a decade ago. In the interim there has been an explosion of information in psychopathology. Proliferation of knowledge has included a widening base of research data and changing or new concepts and theories regarding classification, measurement methods, and etiology of abnormal behaviors and mental disorders. It has been an active and productive period for biological and behavioral scientists and clinicians, particularly in terms of changing notions of the complex interaction of environmental and biological factors in many disorders. For example, with the classic disorders-such as anxiety and dissociative disorders-our understanding, while far from perfect, has been greatly enhanced in recent years. Whereas there was almost a vacuum of empirical knowledge ten years ago about the personality disorders, concentrated efforts have been undertaken to investigate classification, comorbidities, and expression of the personality disorders, and variants in normal personality traits. In addition, scientific advances in the fields of behavioral medicine, health psychology, and neuropsychology have greatly contributed to our knowledge of psychopathology and the interplay of psychobiological factors. It is now commonly acknowledged that psychopathology is not limited to the traditional mental illness categories; it also plays a significant role in many physical illnesses, such as cancer and AIDS. With these developments, it became clear that the first edition of this handbook was outdated and that a revision was needed.

Average Rating
From a review of the first edition:
'Adams and Sutker have assembled an impressive and wide-ranging volume...recommended strongly to researchers, to clinicians, and to university students.'
Contemporary Psychology