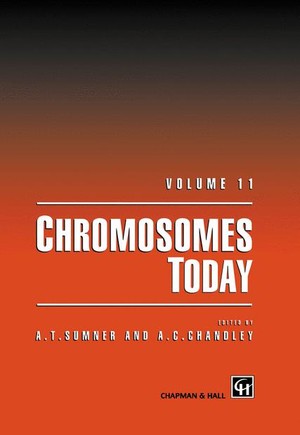 When the late Professor C. D. Darlington founded what developed into the International Chromosome Conferences in Oxford in 1964, he was concerned that scientists who worked on different aspects of chromosomes, or who studied them in different ways, should have the opportunity of "discussing the fundamental problems of chromosomes with one another". The fact that well over 300 scientists with a wide variety of interests came to Edinburgh in August 1992 for the 11th International Chromosome Conference shows that there is still the same need, and also the desire among chromosomologists to have such discussions. The present volume contains almost all the invited contributions, and attests to the diversity of approaches and applications in chromosomal studies. A few years ago it may have seemed to some that chromosome studies were being superseded by molecular biology, but the molecular biologists have now realized that they need to know about chromosomes, and indeed an important, if ill-defined discipline of 'molecular cytogenetics' has grown up in recent years. We are pleased that in planning the Conference and this book, so much of the work presented is at the interface between cytogenetics and molecular biology. This will surely continue in the future, as boundaries between disciplines are largely artificial, and each has much to learn from the others.

From chromosome number to chromosome map: the contribution of human cytogenetics to genome mapping. Molecular analysis and in vivo biology of human centromere proteins. Structural and functional analysis of the telomere region of human chromosome 16p. Isochores and chromosomal bands. Ribosomal genes and nucleolar morphology. Nucleolar proteins during mitosis. Compartmentalization of the cell nucleus: case of the nucleolus. Chromosomal divergence and speciation in grasshoppers. Chromosomal change and speciation: the Sceloporus grammicus complex (Reptilia Sauria) as a case study. Molecular-cytogenetic analysis of the recurring chromosomal abnormalities in acute leukaemia. Chromosomal abnormalities in solid tumours. Non radioactive in situ hybridization on metaphase chromosomes and interphase nuclei in malignant cells. Gene mapping and chromosome analysis by fluorescent in situ hybridization. Microdissection of GTG-based chromosomes and PCR-mediated cloning. Molecular cytogenetics - biology and applications in plant breeding. Cereal genome structure and evolution. Fragile sites and unstable elements. The AZF-function of the human Y chromosome during spermatogenesis. Unpaired sex-chromosomes and gametogenic failure. Mammalian sex determination: what we have learnt from a chromosomal design fault. Evolution of the mammalian XY pairing segment. The questionable role of the synaptonemal complex in meiotic chromosome pairing. Meiotic nodules in vascular plants. The origin of non-disjunction in humans. Aneuploidy in oocytes of mammals, cell cycle control and gene expression. Minisatellite mutation and recombination. The M26 homologous recombination hotspot: sequences, factors and chromosomal context. Imprinting and epigenetic programming of the mouse genome: long lasting consequences for development and phenotype. Methylated DNA binding proteins and chromatic structure. Rye B chromosome transmission depends on the B, the carrier of the B and themother of the carrier.