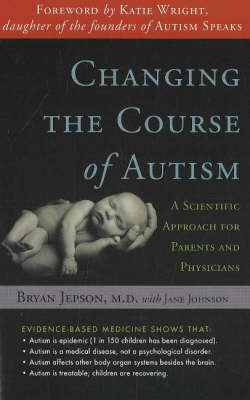 'Changing the Course of Autism' has the potential to revolutionise the way autism is perceived and managed. Most books on this subject describe educational and behavioural therapies, but autism is a medical disease, not a psychological disorder. This groundbreaking books shows that the disease can be treated by reducing the neurological inflammation that is part of the disease process, rather than simply masking the symptoms with drugs like Ritalin and Prozac. The authors have seen autistic behaviours improve dramatically or disappear completely with appropriate medical treatment. The book reviews the medical literature regarding the biological nature of the disease, including the potential connection between vaccines and autism. This book builds a bridge between the medical profession and parents who are angry at the rise in this disease and the way it is treated. It is the only book on this subject written by an MD who is also the parent of an autistic child. In 2001, the second son of Jepson was diagnosed with autism.
Over the course of that year, he and his wife Laurie began exploring treatment options and found that the medical community knew very little about the cause, the treatment, or the prognosis of this disease. After a year of research, the couple established the non-profit Children's Biomedical Center of Utah. There autistic children could receive the most up-to-date care available. From 2002-2005, Dr Jepson treated hundreds of children on the autism spectrum and the clinic raised awareness throughout the intermountain West concerning issues related to autism and other childhood developmental disorders. Because he was a leading specialist in the field, Dr Jepson was recruited to join the team at Thoughtful House Center for Children, a multidisciplinary clinic dedicated to caring for children with autism and related conditions. The Thoughtful House is designed to integrate biomedical, gastrointestinal, and educational intervention into a coordinated effort, and to use this model to perform clinical research. It officially opened January 1st, 2006, and Dr Jepson is now its Medical Director.

Introduction: Coming to Terms with Autism; An Important Note to Readers; The Rise and Fall of the "Refrigerator Mother" Theory; Autism Isn't Purely Genetic; The Autism Epidemic; Autism is a Disease, Not a Disability; Basics of the Immune System; The Problem of Immune Dysregulation; Measles and the MMR Controversy; Is Autism a Gut Disease?; Why Can't They Detoxify?; Does Mercury Cause Autism?; Further Evidence Against Mercury; Autism and the Brain; The Autism Web -- Making Sense of the Disease; Treating Autism; Correcting Nutritional Deficiencies; Treating the Gut; Detoxification; Treating the Immune System; Treating the Brain; Lessons From Israel; Glossary; Index.