Price
Quantity
£141.99
(To see other currencies, click on price)
Hardback
Add to basket 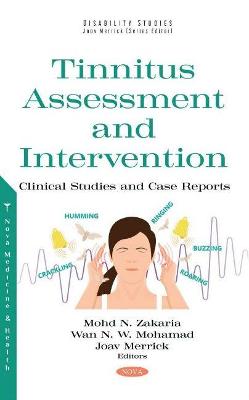 Tinnitus ("ringing in the ears") is a prevalent symptom among adult patients with ear disorders. Often co-existing with other otological symptoms such as hearing impairment and hyperacusis, it requires specialized assessments and interventions to minimize its negative consequences, as well as to improve the quality of life of the affected individuals. Even though notable achievements have been seen in tinnitus studies and clinical services to manage patients with tinnitus are now more commonly available, ongoing research efforts are still warranted to enhance the understanding on the pathophysiology of tinnitus, as well as in search of the optimum treatments and interventions of this phantom auditory perception. In this book we have gathered the latest clinical studies and case reports on tinnitus, which could be of interest to academicians, researchers, clinicians and other interested readers.

Preface; Introduction; Research on Tinnitus (Ringing Sound in the Ear): Past, Present and Future; The Relevance of Tinnitus Psychoacoustic Procedures in Assessing Patients with Tinnitus; The Effect of Masker Type on Tinnitus Suppressive Effect; The Perceived Severity of Tinnitus Has No Correlation with Tinnitus Pitch and Loudness; Tinnitus and Cognition: How are they Related?; A Survey on Tinnitus Management by Mental Health Professionals in Malaysia; A Validation Study of a Simplified Version of Malay Tinnitus Questionnaire; The Pattern of Residual Inhibition Among Patients with Tinnitus When Exposed to Different Types of Maskers; Clinical Characteristics of Malaysian Patients with Tinnitus: Preliminary Findings from Hospital Universiti Sains Malaysia; The Characteristics of Tinnitus Among Hospital Workers Exposed to Loud Noises; Measuring The Impacts of Tinnitus: An Update on Self-Report Tinnitus Questionnaires; Is There a Relation Between Tinnitus Severity and Hearing Handicap?; The Usefulness of Non-Invasive Treatment in a Patient with Bilateral Vascular Loops; The Severity of Tinnitus Has Influence on The Improvements Following Sound Therapy; Sound Therapy Can Be Beneficial to A Patient with Absent Residual Inhibition; The Coexistence of Hearing Loss, Tinnitus and Hyperacusis: Which Symptom Should We Manage First?; Tinnitus Improvement Following Sound Therapy: The Mismatch Between Tinnitus Loudness and Annoyance; The Absence of Cobra Effect in a Patient with Long-Term Use of White Noise Therapy; About the Editors; About the Audiology and Speech Pathology Programme, School of Health Sciences, Universiti Sains Malaysia, Kelantan, Malaysia; About the National Institute of Child Health and Human Development in Israel; Index.