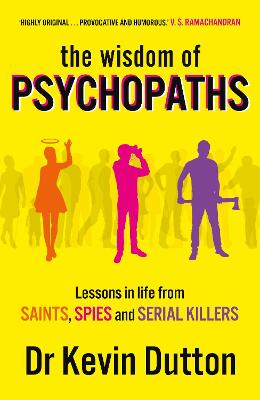 Psychopath. No sooner is the word out than images of murderers, rapists, suicide bombers and gangsters flash across our minds.

But unlike their film and television counterparts, not all psychopaths are violent, or even criminal. Far from it. In fact, they have a lot of good things going for them. Psychopaths are fearless, confident, charismatic, ruthless and focused - qualities tailor-made for success in twenty-first-century society.

In this groundbreaking adventure into the world of psychopaths, renowned psychologist Kevin Dutton reveals a shocking truth: beneath the hype and the popular stereotype, psychopaths have something to teach us.

'This startling study considers whether or not we have anything to learn from psychopaths . . . it's good to know that rubbing shoulders with such dangerous characters hasn't destroyed his sense of humour.' THE TIMES

'Inspiring and revelatory. Dutton's book gave me an insight into who I really am' ANDY McNAB

'Dutton's curiosity takes him from boardrooms and law courts to neurological labs . . . Psychopaths, we learn, are the ultimate optimists; they always think things will work in their favour' GUARDIAN