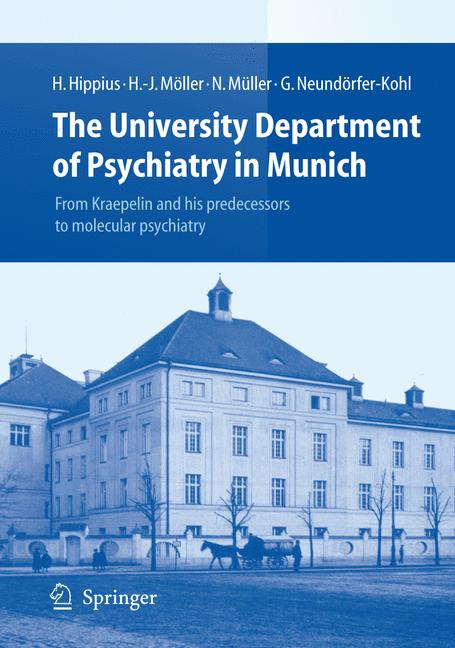 This book first appeared in Germany in 2004. In response to the great amount of interest in the book expressed by colleagues from all over the world, we subsequently decided to produce this English version. We have also taken this opportunity to update the information on the Department of Psychiatry since 1994 to include further developments up to the present day (see Chapter 15). One can look at a hospital from all kinds of different perspectives. For psychiatrists with the daily medical task of dealing with the life histories of their patients, it is understandable that they are interested in the development of their hospital from a historical perspective. To do this for the University Department of Psychiatry of Munich an introduction can be made by reminding the reader of a date: just over 100 years ago, on November 7, 1904, the newly constructed »Royal Psychiatric Hospital of the University of Munich« was inaugurated with a ceremonial act and handed over to the public. Emil Kraepelin gave a ceremonial speech on the occasion.

The building history of the Munich clinic substantiates the developments in psychiatry during the past 100 years; but sole illustration of the constructional aspects would be dull and impersonal. The development of a clinic could be understood as a life story, in which not only the building and organisation structure itself, but also the patientes treated in the clinic and the people working there should be taken into consideration: Doctors from the Munich clinic have always enhanced the development of clinical psychiatry and psychiatric science decisiveley. As such, the names of Emil Kraepelin and Alois Alzheimer are known to all psychiatrists all over the world nowadays - even to those, who do not realize that the scientific work of these names are closely linked to the Munich clinic. 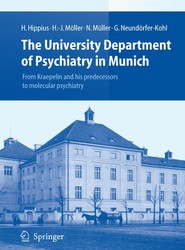 The University Department of Psychiatry in Munich
Hanns Hippius
£17.99