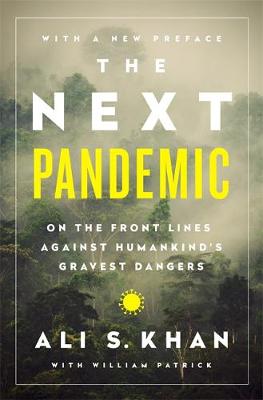 The Next Pandemic is a gripping book that confronts the most urgent question facing our species: when, where, and how will the next major outbreak arrive?

Some of history's biggest killers have been infectious diseases: The Black Death killed around 20 million in the 14th century; Spanish Flu killed 50 million in 1918; the AIDS pandemic has killed almost 40 million since 1981. There is no guarantee that we can prevent another such disaster, but whenever a new scare emerges, Dr. Ali Khan is sent to try.

This book is Dr. Khan's story of 25 years of containing these near misses, in his long career at the Center for Disease Control. During the 1995 Ebola outbreak in Zaire, Khan worked among Red Cross workers digging mass graves, rescuing struggling patients from near-abandoned hospitals and ultimately finding Patient Zero. In 2001, he traveled to Washington, DC, summoned by a midnight phone call, to prevent anthrax spores from spreading through the Senate Office building's ventilation system. In 2002, he was called to Hong Kong to quarantine victims of SARS, a contagious disease with no cure and no vaccine. In each of these stories, Khan reconstructs the chaos of those first moments on the ground, making life-and-death decisions on limited and conflicting information, with local, federal, and international authorities fighting to contain both the virus and the panic.

Through these and other stories, Khan breaks down the sources of the next pandemic: mutation; spillover from other species; lab accidents; bioterrorism; and natural disasters. He shows that the danger of an outbreak is more real than ever in a world of climate change and global commerce, but that we need not only live in fear. His career is a testament to the power of good information, habits, and poise under pressure, as we work to fight whatever exotic contagion comes next.

The Next Pandemic is a vivid and necessary book about rampant and violent diseases, and disasters narrowly averted; and the tools we have to keep them at bay.