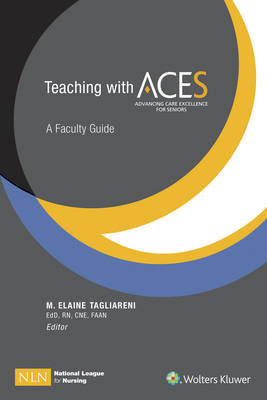 Publisher's Note: Products purchased from 3rd Party sellers are not guaranteed by the Publisher for quality, authenticity, or access to any online entitlements included with the product.

Awarded third place in the 2017 AJN Book of the Year Awards in Gerontologic Nursing.

How can nurse educators creatively use evolving knowledge of care of older adults to effectively teach individualized, person-centered care for this vulnerable population?

The book is filled with exemplars of how faculty—many of them NLN Hearst Foundations Award winners—applied the ACE.S framework to their unique curricula. Nurse educators using this resource can study the underpinnings of the ACE.S framework as a foundation for their use of the free resources provided on the NLN website (www.nln.org/ACES).

“To the nurse educators who have the opportunity in these pages to learn about ACE.S, teach the underlying academic theory, and expose students to the unfolding cases and simulations, the Hearst Foundations are grateful to you for your commitment to nursing education and to preparing the next generation of this noble workforce to care for older adults.”
George B. Irish
Eastern Director, Hearst Foundations
New York, New York

M. Elaine Tagliareni, EdD, RN, CNE, FAAN is currently a Chief Program Officer and Director of the NLN Center for Excellence in Care of Vulnerable Populations at the National League for Nursing, Washington, DC. For over 25 years Dr. Tagliareni was a Professor of Nursing and the Independence Foundation Chair in Community Health Nursing Education at Community College of Philadelphia. She also served as President of the NLN from 2007-2009; in that position she worked to re-frame the dialogue concerning entry into practice to focus on developing and supporting models that increase the academic progression of all nursing graduates, from LPN to baccalaureate to masters’ and doctoral programs, to build a more diverse and educated workforce. In her role as Independence Foundation Chair, she has served as president of the National Nursing Centers Consortium (NNCC) to advance state and federal health policy to include nurse managed health centers as essential safety net providers for older adults and other vulnerable populations.

Dr. Tagliareni has a long history of organizational leadership and grant funded initiatives, funded through the W. K. Kellogg Foundation, the National Institute of General Medical Sciences, National Institutes of Health, The John A. Hartford Foundation, Independence Foundation and the Independence Blue Cross Foundation and  to advance nursing practice and education, increase diversity of the nursing workforce and promote educational mobility for all nurses through the creation, implementation, and dissemination of new educational models.  From 2012-2015 she was the PI on a Hearst Foundations funded project to disseminate the NLN Advancing Care Excellence for Seniors (ACE.S) program to faculty nationally.

Dr. Tagliareni received her BSN from Georgetown University School of Nursing, a master’s degree in Mental Health and Community Nursing from the University of California, San Francisco, and her doctorate from Teachers College, Columbia University.