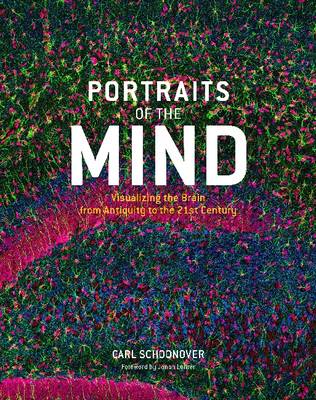 The human brain to this day remains the most elusive, mysterious, and maddeningly complex organ in our bodies. Yet, during the last ten to fifteen years, novel methods and new technologies for creating images of the brain and its components have enabled unprecedented advances in neuroscience, providing us with new ways of seeing and interpreting our brains and ourselves. As Dr. Eric Kandel, a renowned neuroscientist at Columbia recently told the New York Times: In this field, we are merely in the foothills of an enormous mountain range...A" In fact, the rate of discovery as a result of new imaging techniques far outstrips our understanding of what scientists are finding. It's a very exciting time in neuroscience, and Portraits of the Mind: Visualizing the Brain from Antiquity to the 21st Century captures the most important, most fascinating highlights of this brave new world unfolding to scientists for a whole new audience. The remarkably beautiful images being produced are used in the daily work of scientists around the world, yet most have been seen only by scientists and will be viewed in this book for the first time by a mainstream audience.
Seven chapters will each introduce a different area of study with a brief essay written by a well-known scientist specializing in that field and accompanied by ten to fifteen images that best elucidate the topic and extensive, detailed captions by Schoonover describing and analyzing the significance of each. Beginning with a brief overview of past theories of the mind, from antiquity to the birth of modern neuroscience in the 19th century, and bringing us up to the latest advances and techniques in modern times, all is illustrated with truly spectacular images that could pass for abstract art, from intricate drawings by such scientists as Leonardo da Vinci and Santiago Ramon y Cajal (considered by many to be the greatest neuroscientist of all) to the latest imagery such as the spectacular rainbow-colored neurons being produced by a technique called Brainbow, which was discovered in 2007 and allows researchers to study the anatomical relationships between more than a hundred neurons at once (previously only a few at a time could be discerned).
Author Carl Schoonover and the contributing scientists describe, analyse and convey the importance and context of each subject in a tone and style that is accessible and easily grasped by a non-scientist reader. Yet the scientific information is substantial enough that the book will surely appeal to hard-core scientists as well. Author and scientist Jonah Lehrer will contribute a foreword.