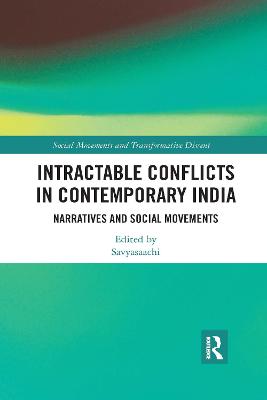 This book attempts a representation of society in contemporary India through an ethnography woven around long-standing intractable conflicts - of displacement and rehabilitation, patriarchy, insurgency and counter-insurgency operations, and climate change. Each chapter in this volume offers a critical transformative narrative in response to these conflicts. It asks how social justice and equality is to be constructed and provides a fresh perspective.

It is argued that social movements can no longer be concerned only with itemizing a checklist of demands; it is now necessary to be free of the hegemony of current frames, categories, concepts and principles, and to rethink the 'promise'. The volume maintains that this effort to step out of the 'endless waiting' for delivery of a 'promised value' draws out the labour of transformative action. A valuable contribution to understanding social movements in India, this work challenges the established discourses around grassroots politics, progressive policies and legislations as well as radical mass movements.

The book will interest students and researchers of social movements, conflict and peace studies, sociology and social anthropology, political science and development studies. It will also be useful to those working in the areas of human rights, social exclusion and inclusive policies.

1. Introduction: Transformative Action, The Promise and Intractable Conflicts 2. 'Flooding Us Out with Money': Movements against Displacement in Central India 3. News Frames, Conflict and Myth-Making 4. Reframing the Debate: The Tribal Question and Contemporaneity 5. Large Dams as 'Temples of Modern India'? An Obituary to Nehruvian Techno-Political Dreams and a Plea for Gandhian Ethics 6. Why India Failed the Left? A Relook at the Politics within the Mainstream Left Movement in India 7. Individual-Territory-Movement Nexus in Armed Movement Resilience: Case of the Maoist Movement in Warangal, Telangana 8. Making Resistance: Narratives of Communist-Led Agrarian Movements in Contemporary India 9. Mobilizing for Science Democratizing Movements: Lessons from the Experience of People's Science Movements in India 10. The Passion of Woman: Sisterhood in Work, Worship and the Vernacular 11. The Climate Change Discourse in India: Is a Social Movement Possible?