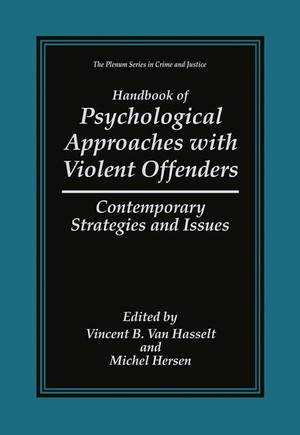 The past quarter-century has witnessed a dramatic upsurge of violent crime in the United States and abroad. In this country, the rise in violent criminal activity has been consistently documented in such published accounts as the Uniform Crime Reports and the Statistical Handbook on Violence in America, published by the FBI and the Vio­ lence Research Group, respectively. Further, social scientists-particularly those working in the fields of sociology and psychology-have provided a convergence of findings attesting to the magnitude of one of today's most significant social problems: domestic violence (e. g. , spouse, child, and elder abuse). Such efforts have served as the impetus for heightened clinical and investigative activity in the area of violent be­ havior. Indeed, a wide range of mental health experts (such as psychologists, psychi­ atrists, social workers, counselors, and rehabilitation specialists) have endeavored to focus on strategies and issues in research and treatment for violent individuals and their victims. The purpose of this book is to provide a comprehensive and timely examination of current psychological approaches with violent criminal offenders. Despite the fact that we continue to have much to learn about perpetrators of violent acts, in recent an increasingly large body of empirical data have been adduced about this years issue. However, these data generally have appeared in disparate journals and books. That being the case, it is our belief that such a handbook now is warranted.