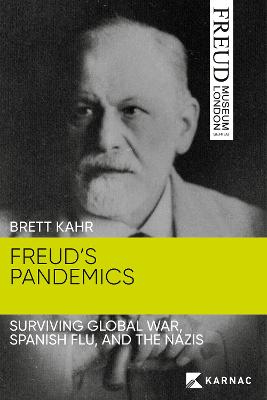 "A vivid account of how Sigmund Freud coped with the great 'pandemics' of his time, from the Great War and Spanish Flu to cancer and the Nazis. By assessing how my great-grandfather might have addressed COVID-19 - the pandemic of our own times - Professor Kahr opens up a series of insights into the life of the man who championed the radical innovation of actually listening to people suffering from mental affliction. Meticulously researched, and written with real pace, this book is a timely reminder of the psychological roots of our response to national trauma." - Lord Freud, great-grandson of Sigmund Freud and President of the Freud Museum London

In this compelling book, the first in the new Freud Museum London series, Professor Brett Kahr describes how Sigmund Freud endured innumerable emotional pandemics during his eighty-three years of life, ranging from unsubstantiated accusations by medical colleagues to anti-Semitic abuse, the loss of one daughter to Spanish flu and the arrest of another child by the Gestapo, to his own painful cancer treatments and his final flight from Adolf Hitler's Austria. Freud navigated these personal and political tragedies while simultaneously creating a method of healing which has helped countless millions deal with unbearable trauma and distress. Through founding psychoanalysis, Kahr argues that Freud not only saved himself from destruction but also provided the rest of the world with the means to achieve a form of psychological vaccination against emotional and mental distress. The Freud Museum London and Karnac Books have joined forces to publish a new book series devoted to an examination of the life and work of Sigmund Freud alongside other significant figures in the history of psychoanalysis, psychotherapy, and depth psychology more broadly. The series will feature works of outstanding scholarship and readability, including biographical studies, institutional histories, and archival investigations. New editions of historical classics as well as translations of little-known works from the early history of psychoanalysis will also be considered for inclusion.

Prologue: Fundraising for Freud
Introduction: "Wouldn't it be better if we all killed ourselves?"
Chapter 1: The Fraudulent Jewish Pervert: Navigating Decades of Collegial Hatred.
Chapter 2: The Great War and the Spanish Flu: An Imprisoned Son and a Dying Daughter.
Chapter 3: From Compulsive Cigar-Smoking to Deadly Carcinoma: Freud's Battle with Physical Pain.
Chapter 4: Death Wishes and the Nazis: How Freud Escaped from Austria.