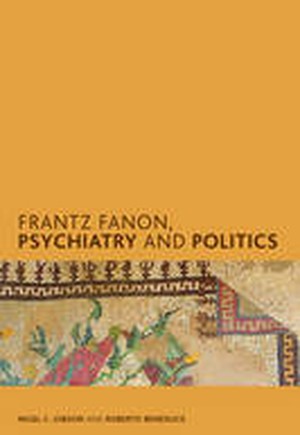 The revolutionary and psychiatrist Frantz Fanon was a foundational figure in postcolonial and decolonial thought and practice, yet his psychiatric work still has only been studied peripherally. That is in part because most of his psychiatric writings have remained untranslated. With a focus on Fanon's key psychiatry texts, Frantz Fanon: Psychiatry and Politics considers Fanon's psychiatic writings as materials anticipating as well as accompanying Fanon's better known work, written between 1952 and 1961 (Black Skin, White Masks, A Dying Colonialism, Toward the African Revolution, The Wretched of the Earth). Both clinical and political, they draw on another notion of psychiatry that intersects history, ethnology, philosophy, and psychoanalysis. The authors argue that Fanon's work inaugurates a critical ethnopsychiatry based on a new concept of culture (anchored to historical events, particular situations, and lived experience) and on the relationship between the psychological and the cultural. Thus, Gibson and Beneduce contend that Fanon's psychiatric writings also express Fanon's wish, as he puts it in The Wretched of the Earth, to "develop a new way of thinking, not only for us but for humanity."

Foreword Alice Cherki / Introduction / 1. The Thoughts of a Young Psychiatrist on Race, Social Psychiatry, Theories of Madness and `the Human Condition' / 2. The Political Phenomenology of the Body and Black Disalienation / 3. The Ends of Colonial Psychiatry and the Birth of a Critical Ethnopsychiatry / 4. Suspect Bodies: A Phenomenology of Colonial Experience / 5. Further Steps Towards a Critical Ethnopsychiatry: Sociotherapy: Its Strengths and Weaknesses / 6. The Impossibility of Mental Health in a Colonial Society: Fanon Joins the FLN / 7. Psychiatry, Violence, and Revolution: Body and Mind in Context / 8. The Tunis Psychiatric Day Hospital / 9. Bitter Orange: The Consequences of an Anticolonial War / 10. From Colonial to Postcolonial Disorders, or the Psychic Life of History / 11. A Note on Translating Frantz Fanon Lisa Damon / Bibliography