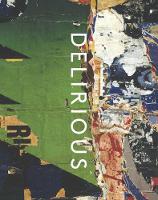 An extraordinary, unconventional reevaluation of postwar art through the lens of delirium

Addressing the maniacal, eccentric, and disorienting in artworks made between 1950 and 1980, Delirious situates a fascination with the absurd and irrational within the context of the violence and brutality witnessed during World War II as well as the rapid expansion of industrial capitalism in the 1950s. Skepticism of science and technology-along with fear of its capability to promote mass destruction-developed into a distrust of rationalism, which in the arts had the paradoxical result of extracting irrational effects from rational means. Disturbing and challenging, these works upended traditional notions of aesthetic harmony.

This thought-provoking book features work by approximately 70 artists from Europe, Latin America, and the United States, including Dara Birnbaum, Leon Ferrari, Bruce Nauman, Howardena Pindell, Peter Saul, Nancy Spero, and many others. Placing the fascination with delirium within historical, literary, political, and cultural contexts, it offers a provocative view of how like-minded artists experimented with irrational subject matter and techniques-ranging from sculpture, painting, photography, and works on paper to film, video, and book design-and forged a new aesthetic that directly responded to the unbalanced times in which they were created.