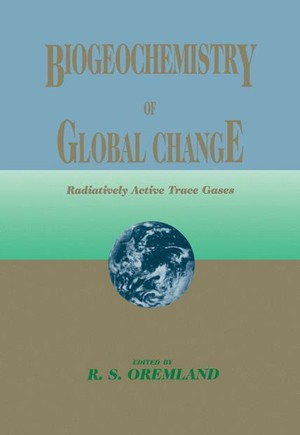 Certain trace gases in the atmosphere are able to absorb electromagnetic energy from the reflection of solar radiation from the Earth's surface. These gases have been increasing steadily and there is concern that they will change global climatic conditions by warming the atmosphere--the so-called ``greenhouse effect.'' Many of these gases originate from biological systems. The Biogeochemistry of Global Change discusses the role of radiative trace gases in this process. The disciplines covered in the book include microbiology, geochemistry, atmospheric chemistry, plant physiology, oceanography and limnology, and soil science. This diversity allows for cross-fertilization, achieving a better understanding of the complex mechanisms for biological and chemical formation, the destruction of trace gases, and the manipulation of ecosystems. Some of the topics covered include: biological mechanisms of formation and destruction of various ``greenhouse'' gases (such as methane, nitrous oxide, carbon dioxide, dimethylsulfide, and chlorofluorocarbons); the outward and consumptive flux of trace gases from marine and terrestrial systems (including anthropogenic sources); global trace gas modeling studies; the atmospheric physical and chemical reactions of trace gases; and the environmental significance of various trace gases in ancient and current atmospheres. The Biogeochemistry of Global Change provides both reviews and primary source material for active researchers in this field and for microbiologists and atmospheric chemists.