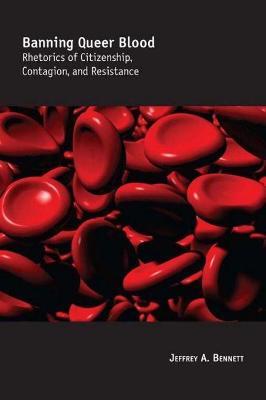 In Banning Queer Blood, Jeffrey Bennett frames blood donation as a performance of civic identity closely linked to the meaning of citizenship. However, with the advent of AIDS came the notion of blood donation as a potentially dangerous process. Bennett argues that the Food and Drug Administration, by employing images that specifically depict gay men as contagious, has categorized gay men as a menace to the nation. The FDA's ban on blood donation by gay men remains in effect and serves to propagate the social misconceptions about gay men that circulate within both the straight and gay communities today.

Bennett explores the role of scientific research cited by these banned-blood policies and its disquieting relationship to government agencies, including the FDA. Bennett draws parallels between the FDA's position on homosexuality and the historical precedents of discrimination by government agencies against racial minorities. The author concludes by describing the resistance posed by queer donors, who either lie in order to donate blood or protest discrimination at donation sites, and by calling for these prejudiced policies to be abolished.