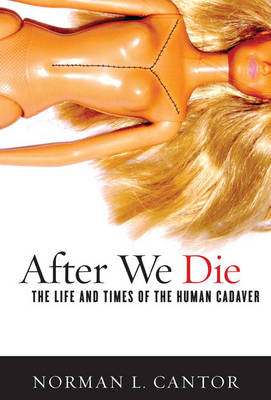 What will become of our earthly remains? What happens to our bodies during and after the various forms of cadaver disposal available? Who controls the fate of human remains? What legal and moral constraints apply? Legal scholar Norman Cantor provides a graphic, informative, and entertaining exploration of these questions. "After We Die" chronicles not only a corpse's physical state but also its legal and moral status, including what rights, if any, the corpse possesses. In a claim sure to be controversial, Cantor argues that a corpse maintains a "quasi-human status" granting it certain protected rights - both legal and moral. One of a corpse's purported rights is to have its predecessor's disposal choices upheld. "After We Die" reviews unconventional ways in which a person can extend a personal legacy via their corpse's role in medical education, scientific research, or tissue transplantation. This underlines the importance of leaving instructions directing post-mortem disposal. Another cadaveric right is to be treated with respect and dignity.
"After We Die" outlines the limits that "post-mortem human dignity" poses upon disposal options, particularly the use of a cadaver or its parts in educational or artistic displays. Contemporary illustrations of these complex issues abound. In 2007, the well-publicized death of Anna Nicole Smith highlighted the passions and disputes surrounding the handling of human remains. Similarly, following the 2003 death of baseball great Ted Williams, the family in-fighting and legal proceedings surrounding the corpse's proposed cryogenic disposal also raised contentious questions about the physical, legal, and ethical issues that emerge after we die. In the tradition of Sherwin Nuland's "How We Die", Cantor carefully and sensitively addresses the post-mortem handling of human remains.