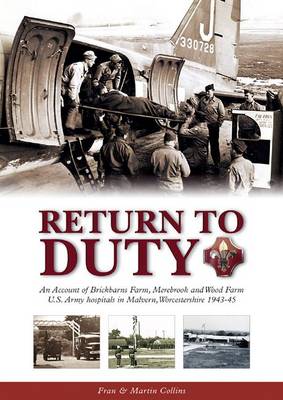 "Return to Duty" tells the story of three U.S. Army hospitals located at Brickbarns Farm, Merebrook and Wood Farm in the Malvern Wells area of Worcestershire during World War II. All three hospitals were built by British contractors in 1943 and used by American hospital units until the end of the war in Europe; Brickbarns Farm was occupied until December 1945. This book looks at the day to day activities at the hospitals using archive material and accounts and previously unpublished photos from those who were there at the time. It also looks in depth at the stories of some of the soldiers who passed through the hospitals. It touches on the impact that the occupants of the camps, both patients and medical staff, had on the surrounding area of Malvern.