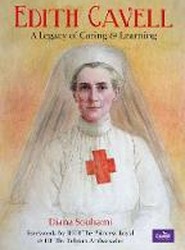 Edith Cavell
Published October, 2014
By PITKIN
Publisher: Pitkin Publishing
Rating:
in-stock
Edith Cavell's primary aim was to be a nurse and to help anyone who needed her. Her caring nature led her into Resistance work and she helped over 200 Allied soldiers escape to freedom. But she was discovered and subsequently arrested and sentenced to death. And with courage and humility she was killed by firing squad on 12 October 1915.
Paperback / softback
£4.99
Quantity: Add to basket