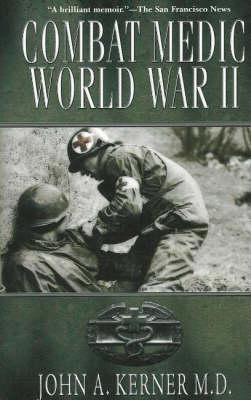 Editorial Reviews From Booklist Called to active duty late in 1943, University of California-San Francisco surgical resident Kerner went to England with the Thirty-fifth Infantry Division in May 1944. Landing in Normandy shortly after D-Day, he was involved in combat for 264 days in France, the Low Countries, and Germany. He glorifies neither himself nor the military but, describing much individual and small-group heroism, shows how hard-pressed American forces, ill-informed about the enemy, often had to throw badly trained replacements into the front lines, where they naturally suffered many casualties. Kerner frequently describes personal highlights, such as diving for cover while assisting a patient and receiving the rarely given Combat Medic Award after riding the outside of a tank blasting its way through the siege at Bastogne. Kerner based the book on his letters that their recipients saved, and thereby writes with more immediacy than mere, perhaps clouded memories might allow. Giving his account unexpected depth is his knowledge of popular piano music and of European furniture and buildings, the latter thanks to his interior decorator mother.
William Beatty Copyright A(c) American Library Association. All rights reserved --This text refers to an out of print or unavailable edition of this title. Product Description Over fifty years after the carnage at Normandy, Dr. John Kerner draws from his wartime journals and letters home to present an insightful portrait of war. Medical units under his charge pushed through western Europe, improving the treatment and transportation of the wounded during some of the most brutal fighting. Amidst the mud and blood of combat, this decorated medical officer shares a time and place when living beyond each day was in serious question. Kerner's account includes some of the greatest moments in World War II: the dramatic breakout of the Normandy hedgerow country, the thrilling dash across France in the summer of 1944, and the siege of Bastogne during the Battle of the Bulge.