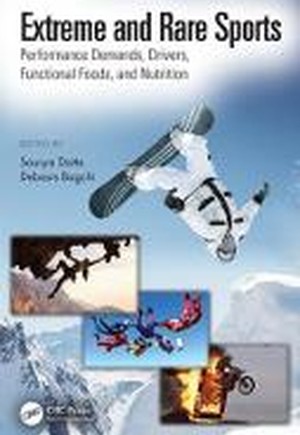 Two crucial components of a healthy life are nutrition and exercise. The importance of appropriate diet, food and nutrition are extremely important to be successful in sports, and, especially, in extreme sports. Extreme sport is an activity where a participant must demonstrate both mental and physical skills. This type of activity provides an adrenaline rush to individuals who are part of the "community of extreme sportsmen." Extreme sports provide opportunity for individuals to be active and fit with added enjoyment of partaking in a fun activity. Extreme sports in conjunction with proper nutrition helps to boost immunity and resistance against common infections. Studies have also exhibited that sports and exercise activities help in managing effective work-life balance as well. Extreme and Rare Sports: Performance Demands, Drivers, Functional Foods, and Nutrition provides a comprehensive treatise on extreme sports emphasizing the importance of nutrition and research-driven nutraceutical supplements in injury prevention and treatment. The book presents information on the nutritional requirements of sports activities on land, in water, or with high altitude-base. It covers a wide variety of definitions, philosophies, thoughts and practices involved with structurally diverse extreme sports. Features: Discusses specific food and nutritional requirements in extreme sports Provides information on the importance of functional foods, nutrition and structurally diverse phytonutrients for different sports Features information on Olympic and diverse extreme sports Details the importance of hydration and use of gelatin; skeletal muscle damage and recovery from eccentric contractions; and information on dietary supplements and antioxidants Presents analysis on growth, marketing, techniques, and future of extreme sports

Sourya Datta is part of the Strategic Deals team at Apple where he is responsible for managing the procurement of a number of components for Apple. Prior to joining Apple, he managed the finances for eBay's North American division. This included managing P&L, budgeting, forecasting, and closing the month and quarters for eBay. He was also responsible for leading the analytics for Latam and Canada for eBay. Prior to that, Sourya was the supply chain manager in the Business Operations and Strategy Group at eBay. He received his Masters in Business Administration from the University of Pittsburgh, Pennsylvania, in Operations and his Bachelors of Engineering from Anna University, India, and worked in various consulting firms before doing his MBA. Sourya was featured in Poets and Quants as one of the best MBAs in 2015 and has won a number of awards in his tenure at eBay. He is an avid sports fan and has completed a number of marathons and Spartan races since 2007. He has been swimming since he was seven years old and has participated in and won numerous state level competitions. He has also taken active part in mountaineering and trekking since he was in elementary school. He has participated in various marathons in California and has been intricately associated with nutrition and functional food requirements for sports performance. He is also the author of two chapters in Developing New Functional Food and Nutraceutical Products that was published by Elsevier/Academic Press in October 2016. He is also the author of a chapter in the second edition of Nutrition and Enhanced Sports Performance published by Elsevier/Academic Press in September 2018. Debasis Bagchi, PhD, MACN, CNS, MAIChE, received his PhD in Medicinal Chemistry in 1982. He is the director of scientific affairs at Victory Nutrition International, Inc., Lederach, Pennsylvania; a professor in the Department of Pharmacological and Pharmaceutical Sciences at the University of Houston College of Pharmacy, Houston, Texas, and, an adjunct faculty member in Texas Southern University, Houston, Texas. He served as the senior vice president of Research & Development of InterHealth Nutraceuticals Inc, Benicia, California, from 1998 until February 2011, and then as director of innovation and clinical affairs of Iovate Health Sciences, Oakville, Ontario, until June 2013, and then chief scientific officer at Cepham, Inc., Somerset, New Jersey from June 2013 until December 2018. Dr. Bagchi received the Master of American College of Nutrition Award in October 2010. He is the past chairman of the International Society of Nutraceuticals and Functional Foods (ISNFF), past president of the American College of Nutrition, Clearwater, Florida, and past chair of the Nutraceuticals and Functional Foods Division of Institute of Food Technologists (IFT), Chicago, Illionois. He is currently serving as a distinguished advisor on the Japanese Institute for Health Food Standards (JIHFS), Tokyo, Japan. Dr. Bagchi is a member of the Study Section and Peer Review Committee of the National Institutes of Health (NIH), Bethesda, Maryland. He has 352 papers in peer reviewed journals, 37 books, and 20 patents. Dr. Bagchi is also a member of the Society of Toxicology, member of the New York Academy of Sciences, fellow of the Nutrition Research Academy, and member of the TCE stakeholder committee of the Wright Patterson Air Force Base, Ohio. Dr. Bagchi is an associate editor of the Journal of Functional Foods, Journal of the American College of Nutrition, and Archives of Medical and Biomedical Research, and an editorial board member of numerous peer reviewed journals, including Antioxidants & Redox Signaling, Cancer Letters, Food & Nutrition Research, Toxicology Mechanisms and Methods, The Original Internist, and other peer reviewed journals.