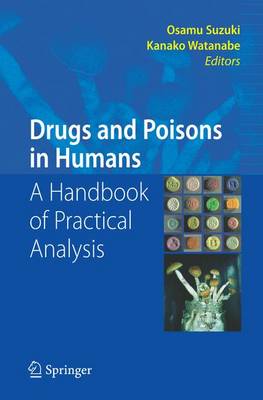 It was with great pleasure that I accepted the invitation to write the foreword for Drugs and Poisons in Humans. A Handbook of Practical Analysis. Dr. Osamu Suzuki and Dr. Mikio Yashiki, two outstanding Japanese scientists, f rst published the Handbook in Japanese in 2002. Specialists throughout Japan contributed analytical methods for a wide variety of therapeutic and illicit drugs, pesticides, and natural toxins and alkaloids. In fact, rarely has such a wide spectrum of analytes and metabolites been addressed within a single reference manual. At the beginning of the book, general topics are addressed, including instructions on h- dling biological materials, measurement of drugs in alternative specimens, and guidance on resolving analytical problems that may occur. T ere are discussions of extraction modalities and detection methodologies and how to select these appropriately based on the physioche- cal characteristics of the drug. Analysis of specif c classes of drugs and relevant metabolites are covered in subsequent chapters. Clinical, analytical and forensic toxicology and clinical ch- istry laboratories will f nd the volume informative and useful. Toxicologists are of en faced with developing methods for new drugs and metabolites with little information available in the literature. T is book provides a great starting point for method development providing pro- dures that have been utilized in real life situations. In addition, toxicologists developing new methodologies may use this volume as a guide to selecting the most appropriate instrumen- tion to handle the breadth of their analytical workload.

Includes source of chemicals needed for the experiments

Texts are composed by 67 experts in analyzing the respective compounds

Clear and uniform structure of chapters for ease of reading

The text is illustrated by many diagrams and tables