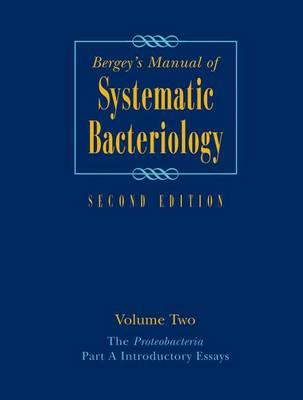 Since publication of the first edition of Bergey’s Manual of Systematic Bacteriology, it has become recognized throughout the world as the principal monographic work in the field of prokaryotic biology. Like a dictionary to a writer, the Manual is usually the first reference that a microbiologist consults when questions arise regarding the characteristics of an unfamiliar species or an unknown strain that bears some similarity to a more familiar one. While the first edition has served the community well for many years, it has become outdated. As a result, the editorial board of Bergey’s Manual Trust, in collaboration with more than 500 of the world’s leading authorities in prokaryotic systematics, is in the process of revising Bergey’s Manual of Systematic Bacteriology so that it reflects current thinking and advances in the field.

Rapid advances in DNA sequencing technology have led to a major change in the way that prokaryotes are classified. Sequence analysis of highly conserved regions of the bacterial genome, such as the small subunit rRNA gene, now provide us with a universal method of estimating the evolutionary relationships among all organisms. Such gene-based phylogenetic classifications have led to many new discoveries about prokaryotes that were not reflected in the classification used in the first edition of the Manual. We now know that the prokaryotes fall into two broad domains: the Archaea and the Bacteria. Whereas the Archaea were once thought of as the more primitive of the prokaryotic lineages, we now realize that they are more closely related to the eukaryotes than to the Bacteria by this measure. We have come to realize that many taxa based on shared phenotypic features may be quite distinct from one another based on phylogenetic evidence. The Chromatium, a genus of anoxygenic photosynthetic bacteria are more closely related to E. coli than to some other lineages of anoxygenic photosynthetic bacteria; Mycoplasma and other cell-wall deficient species are members of the Gram-positive clade; the medically important Chlamydia are aligned with the Planctomyces; and the Clostridium, which form a phenotypically coherent group, fall into more than a dozen phylogenetically disparate groups of Gram-positive bacteria. We have also come to realize that prokaryotes represent one of the major sources of biodiversity in nature and play a major role in the functioning of all ecosystems.

In addition to such fundamental revelations, the widespread application of new methods of classifying prokaryotes has led to an explosive growth in the number of validly published species and higher taxa. Since completion of the first edition of the Manual, the number of published species has more than tripled and has been accompanied by numerous taxonomic realignments that take into consideration newly published findings.

Phylogenetic classification is now broadly accepted as the preferred method of representing taxonomic relationships among prokaryotes and eukaryotes alike. While the evolutionary history of the prokaryotes is far from complete, there is already sufficient data to provide a reasonable view of the major lines of descent of the cultivable species. Although the second edition of the Manual retains it’s unique and highly structured style of presentation of information along genus and species lines, the arrangement of content is along the phylogenetic lines of the small subunit rRNA gene, so that the reader is presented with the information in a more natural, biological perspective. The second edition of the Manual also contains more in-depth ecological information about individual taxa and many new introductory essays.

In the preface to the first edition of Bergey’s Manual of Determinative Bacteriology, published in 1923, one of the stated goals of that work was to "stimulate efforts to perfect the classification of bacteria…" The editors of the first edition regarded the Manual as "a progress report leading to a more satisfactory classification in the future" rather than a definitive classification. Bergey’s Manual Trust continues in this tradition and recognizes that, for the Manual to remain scientifically meaningful and useful to the scientific community, it is time for the new edition.

Overview of the second edition of the Manual

As before, the Manual is subdivided into multiple volumes and each genus occurs as a separate chapter with introductory text provided at higher taxonomic levels. The second edition differs from the first in that clinically relevant species are not grouped together into two volumes. Rather, these taxa appear in their proper phylogenetic place. The text is arranged to follow the lineages defined by the large-scale phylogenetic trees maintained by the Ribosomal Database Project and the ARB Project to which a formalized, hierarchical taxonomy and nomenclature have been applied. As volume 2 goes to press, the taxonomy encompasses 6466 species that are assigned to 26 phyla, 41 classes, 88 orders, 240 families and 1194 genera. Each volume contains a collection of introductory essays on the history and use of the Manual; a detailed discussion of the prokaryotic domains; overviews of the classification, identification, and naming of prokaryotes; prokaryotic ecology and phylogeny; the role of culture collections in microbiology; and intellectual property of prokaryotes. Each volume also includes taxon specific essays and a detailed road map that presents the reader with a broad view of how the entire edition will be arranged, a mapping of phylogenetic groups to the phenotypic groups used in the first edition (Volume 1), or an update of newly published taxa and combinations appearing in print since the preceding volume (Volumes 2-5). The details of each volume in print (Volume 1), in press (Volume 2) or in preparation (Volumes 3-5) follow.

Volume 1 "The Archaea and the Deeply Branching and Phototrophic Bacteria" (2001) David R. Boone and Richard W. Castenholz (Volume Editors), George M. Garrity (Editor-in-Chief) with contributions from 105 colleagues. 742 pages with 320 figures and 95 tables. The volume provides descriptions of 413 species in 165 genera that are assigned to the phyla Crenarchaeota, Euryarchaeota, Aquificae, Thermatogae, Thermodesulfobacteria, "Deinococcus-Thermus", Chrysiogenetes, Chloroflexi, Thermomicrobia, Nitrospira, Deferribacteres, Cyanobacteria, and Chlorobi. In addition, the volume contains an introductory chapter to nonoxygenic, phototropic species of Bacteria belonging to the Proteobacteria and Firmicutes, which will be repeated in more detail in subsequent volumes.

Volume 2 "The Proteobacteria." (2004) Don J. Brenner, Noel R. Krieg, James T. Staley (Volume Editors), and George M. Garrity (Editor-in-Chief) with contributions from 339 colleagues. The volume provides descriptions of more than 2000 species in 538 genera that are assigned to the phylum Proteobacteria. This volume is subdivided into three parts. Part A, The Introductory Essays (332 pgs, 76 figures, 37 tables); Part B, The Gammaproteobacteria (1203 pages, 222 figures, and 300 tables); and Part C The Alpha-, Beta-, Delta-, and Epsilonproteobacteria (1256 pages, 512 figures, and 371 tables).

From the reviews of the second edition:

"Satisfyingly heavy and a pleasure to handle … Volume 2 of the Second Edition of this highly respected work boasts a combined weight of more than 7 Kg. Their sheer size is a testament to the quantity of information contained inside. … Each article … is organized in a standardized way that helps make the information more digestible. … The updated Manual has a place in all scientific libraries and its importance can only grow as we continue to explore and appreciate the vast prokaryotic diversity surrounding us." (Dawn Field, Microbiology Today, July, 2006)